The hate that dare not speak its name

The arguments over the recently released film Falling Down has mostly missed the point. It is marketable to moderate racists, in as much as its white protagonist begins his descent into violence with a fight with a Korean, and then goes on to a run-in with a vicious Chicano gang. But this is carefully balanced by a black man who is being victimised by a loans company, and by a female Chicano policewoman. You could say that it was mostly targeted at people who are racist but do not like to see themselves as racist. The balance is a very necessary part of the film’s marketability. 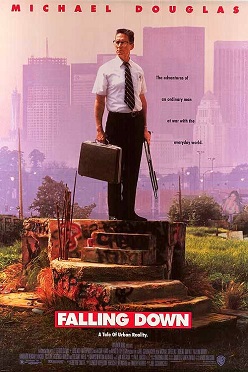 A similar nip-flop is shown concerning women ‘s issues. D-Fens, the chief character whose violent rampage defines the film, is driven by a desire to reassert male dominance. He wants to resume what he sees as his proper role, his ownership and control over his child and over the wife who has rejected him. This is identified as wrong, which will please the female audience. And yet the ‘good guy’, the elderly police detective who finally tracks him down, he is seen as asserting his male authority over his wife, going back on his agreement to retire and go to live where she will be happy. Naturally, D-Fens’ wife is young, pretty and a highly sympathetic character, while the detective’s wife is none of these things. So in a rather slick way, the film appeals to people with different and mutually incompatible expectations.

Then there is the matter of using violence to solve your everyday social problems and conflicts. D-Fens does this, and is labelled as wrong for so doing. Even more wrong is the white racist he kills, who expresses the concealed notions in an overt and revolting form. And yet, the ‘good guy’ does much the same things as D-Fens, on a more moderate scale. After starting off as a representative of civilised values, he hits a colleague, ignores procedures and insults his boss, even though the man could be seen as trying to make amends for his own past rudeness.

To put it briefly, Falling Down manages to have both sides of every argument. Within living memory, the white male middle class in America had an unquestioned dominance. It was a dominance that was maintained by violence, including lynch law. But also it was propped up by a feeling of moral superiority. A notion that this way of doing things was right, proper and should remain unchanged.

The overthrow of this established dominance in the 1960s was an astonishing phenomenon. So astonishing that people have put it out of their minds, claiming that the 1960s were no more than a brief bout of self-indulgence. Of course there was a lot of self-indulgence involved, but this mostly ended up expressing itself as Reaganism and Thatcherism. The more serious side was a radical idealism that changed the whole definition of what was politically correct and what was incorrect. The absurdities of some manifestations of ‘political correctness’ are real indeed. But they should be seen in the context of a very recent overthrow of a different and much worse sort of ‘political correctness’. Segregation in the American South was not just a hold-over from slave times, it was an active and growing force. And as recently as the 1950s, women in Hollywood films were almost always presented as passive objects, helpless dolls for the males to fight over.

Part of the problem with US politics is that it is supposed to be defined by law, but in fact is not. All sorts of peculiar meanings are drawn from the constitution, but none of them are justified. The Constitution actually says not a word about either God or family values- merely a prohibition of established religions in the First Amendment. It was never supposed to be a formula for life or for a changing world, merely a rule-book for a new political structure. Even as such, it had loopholes. Aaron Burr made use of one such, and almost got elected president by trickery. And the American Civil War was in large part caused by a serious omission from the rules, the absence of any statement as to whether a state may or may not secede from the Union. Still, as a political rule-book, the US constitution worked OK. Given the problems of uniting thirteen political units that had each been governed separately as part of the British Empire, holding the whole thing together was no small achievement.

The trouble lies with pretending that the Constitution is universal definition of what life should be. Great social issues are settled by accident and legal gobbledygook, not by a conscious will to change. And since everything is allegedly drawn from the will of the founders, there is much too little understanding of how the society has evolved. The founders would undoubtedly have established legal superiority for white Anglo-Saxon Protestant males, if it had ever occurred to them that this dominance might be challenged. But they never did, so that it was possible to use the written words of these people to define a quite different sort of society. And part of the price for doing things that way was that the society never properly came to terms with the transformation.

Given the change, there is a large market for opinions that appeal to buried prejudices without seeming to do so. This is true of Hollywood in general. Falling Down is only a particular and ot very important example of something much older, wider and more powerful. Hollywood’s cunning appeal is like that of Shakespeare’s Cleopatra:

“Age cannot wither her, nor custom stale
“Her infinite variety; other women cloy
“The appetites they feed, but she makes hungry
“Where she most satisfies; for the vilest things
“Become themselves in her, that the holy priests
“”Bless her when she is riggish” (tricky).

Falling Down is just one more movie. It comes more than ten years after a rather similar package was put together by Ronald Reagan, former B-movie star, lapsed leftist, expert manipulator of a confused and angry America. Age has not withered him that much. And he was expert at tapping various contradictory feelings to get elected as Republican President. Right-wing Christians really did believe that a Hollywood divorcee would restore traditional Puritan moral values. At the same time, most of those who had taken advantage of the new freedoms were not scared of him. They knew, much more accurately that the right-wing Christians, that the man was only acting a part

People liked a leader who sounded off about traditional moral values, as long as their own freedom was not serious! y interfered with. Even the anti-abortion movement seemed serious, until people finally understood that it might make a real difference. Whereupon the majority pro-choice lobby rose up in wrath, and the anti-abortionists “melted like snow in the fact of the lord”.

The true majority in America is neither moral nor immoral. It is pseudo-moral. A large segment of the society resemble a neighbour of Mark Twain’s, who announced his intention to go to Mount Sinai and recite the Ten Commandments. Given that the m an ‘s behaviour had never been very Christian, Twain suggested that it might be better for him to stay at home and keep the Ten Commandments instead.

Falling Down is a sign of the times.  In many ways the USA is indeed falling down. Reagan and Bush were very successful in preventing the Liberal transformation of the 1960s and 1970s from consolidating itself, They were also able to do much damage to the political and economic structures that had given the Western world a burst of continuous growth and prosperity never before seen in human history. But though the New Right was very good at destroying things, it could not create. The new cannot consolidate itself, the old and traditional cannot reassert itself. The result is simply a mess, filled with violence and inarticulate rage.

[I stand by all this.  But I’d also say that part of the man’s problem was a super-rich Overclass sucking the wealth out of Middle-America.  If military work gets cut back, the same spending could have gone of space exploration, or to recycle more Greenhous Gases.  But the priorities of the rich won out, even though everyone outside the Overclass was damaged.  See Feed-the-Rich Economics for more on this.]